Sculpture Bermagui was almost a victim of the summer’s fires, but considering the art on show at the opening and awards ceremony on 6 March, it’s a welcome relief that these remarkable works will be with us to help heal the wounds of an unforgettable summer.

From the stage in a packed Bermagui Community Centre, Yuin woman Iris White welcomed us to Country in Durga language, a language she said “we were once not allowed to speak at school, or in public …” a language she is having to re-learn.

The large room was full of artists and art lovers, adorned with Sculpture Bermagui’s indoor exhibits, on the walls and on plinths and even hanging from the ceiling.

This year has seen a record number of exhibits, and as Bega Valley Cr Cathy Griff said, “it is uplifting after the horrors of summer that sculptors continue to create and participate here”.

Cr Griff went on to point out “there is growing evidence that tactile arts, in particular, play an important role in disaster recovery by contributing to personal healing, building confidence, creating memorials, and allowing people to give”.

“A Victorian study after the 2009 fires found that ‘art and creative participation are a potent avenue for connecting, giving voice to experience, expressing the unimaginable and generating creative engagement. Sculpture provokes immediate engagement, whether hostile, humorous, perplexed or admiring’”. Cr Griff couldn’t resist suggesting that there must be something in the soil as so many sculptors came from her home-ground of Tanja.

Sculpture Bermagui’s Committee President Paul Payten has said that given the disastrous bushfires affecting the region, the committee thought long and hard about whether to hold the exhibition this year at all. It is a testament to the resilience of the arts community that a record number of exhibitions were received, and that the community has come together with the aid of tireless volunteers to celebrate beauty after calamity.

There is a certain irony that after the fires, the Committee had to deal with immense rainfall during the setting up of exhibition works.

Now it is a vibrant, pulsing green that surrounds the sculptures against the backdrop of stunning ocean vistas, rather than the grey and black of smoke and ash.

Cr Griff announced the Bega Shire Council Acquisitive Prize ($10,000) as being awarded to the impressive, over-sized ‘Landed’, a forged and welded steel work by Thomas Westra depicting a mythical bird with wings still upraised in a show of strength, as the artist says “holding on to the passion for life”.

Cr Griff announced that this work will be installed in the Bemboka community. A visibly emotional Paul Payten thanked his committee and team of volunteers, and also acknowledged Jan Ireland, who for years ran the previous incarnation of the annual sculpture exhibition known as ‘Sculpture on the Edge’.

A highlight of the program this year is the ‘Artist Talks’ to be given by three sculptors this year as part of Sculpture Bermagui: Anneke Paijmans, Pauline Balos and Michael Purdy. The talks will take place in the grounds of a private residence in Mystery Bay, and includes all refreshments.

Other 2020 prize winners were:

Further prizes and events on the programme: 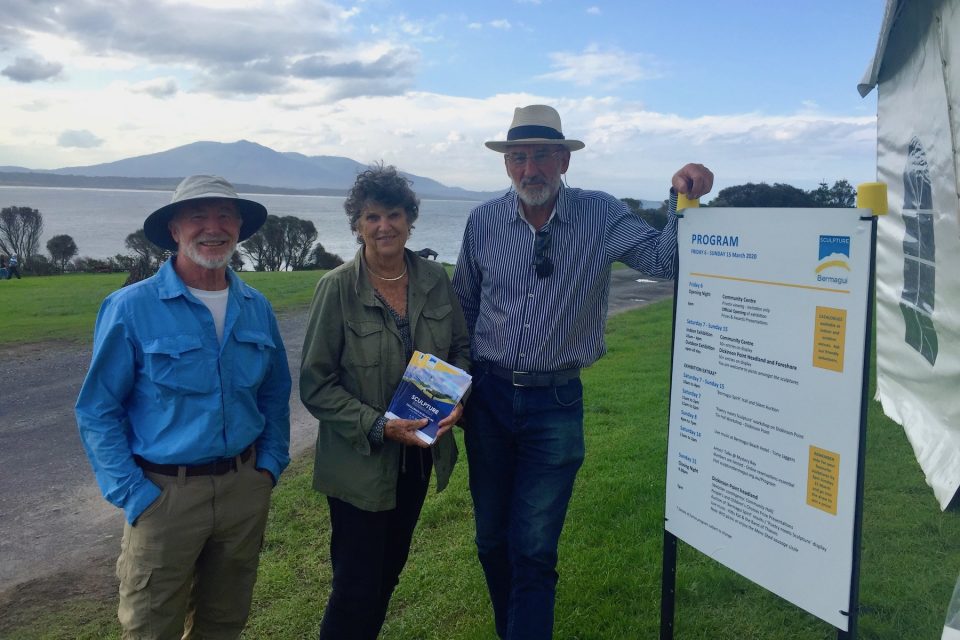 Councillors Cathy Griff and Jo Dodds with Tony Dean at the Sculpture opening. Visit the Sculpture Bermagui website for more information and to support the project here.